40 shades: does the sell-out Fenty Beauty range put the big brands to shame? 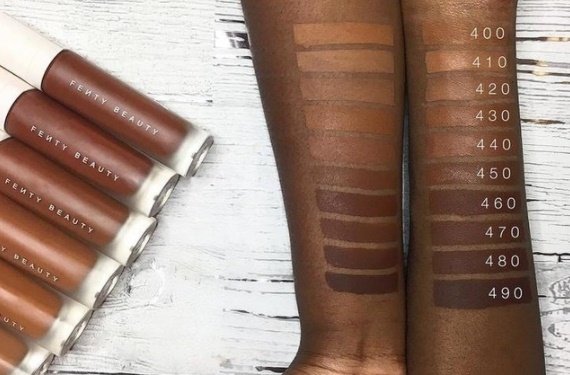 It’s been less than a month since Rihanna’s Fenty Beauty hit the shelves and the word on the street (or actually several thousand words, given the number of column inches the brand has generated) is that many foundation shades are already sold out.

At Harvey Nichols, Stylist reports, two of the deepest pigments, 430 Neutral and 440 Cool, have flown off the shelves, while CNN reveals that Sephora’s US website ran out of stock of eight of the 10 darkest shades just six days after launch. Commentators have been quick to point out that this is proof that darker shades sell. “If you are a cosmetics brand, then it is in your best interest to be a make-up brand for all. There is clearly a market here with great potential if the brand is paying attention,” Ni’Kita Wilson, Vice President of Sales and Innovation for Aware Products told Cosmopolitan.

Meanwhile, at the opposite end of the spectrum, social media has been aflame with albino women posting of their joy in finding a shade that doesn’t make them orange.

“Fenty beauty was created for everyone: for women of all shades, personalities, attitudes, cultures, and races,” writes the singer on the Fenty Beauty site. “Foundation is one of those areas in the beauty industry that has a big void for women at extreme ends of the spectrum. And so, I wanted to make sure that women of all skin tones were covered so they could be included in what I created.”

“Rihanna’s shade range is incredible, especially for darker skinned women and very pale women, who are not usually represented in brand launches,” Florence Adepoju, MDMflow Designer told W Magazine. “Representation has been a huge problem in the beauty industry from a long time so it’s really refreshing to see Rihanna tackle this issue in a bold way.”

But while we couldn’t be more thrilled to see diversity in the make-up aisle, and we’re certainly not denying that there’s still some way to go before our industry can be considered truly inclusive, is this really so new? After all, we’ve been reporting on new woc brand ambassadors and diversity campaigns almost weekly all year. Is Fenty really the trailblazer it’s touted to be?

To find out, we decided to do a spot check of some of the major brands to see just how novel a 40-shade foundation range is. We looked at brand websites only, and counted the number of shades available in the first foundation listed on the page. Here’s the results: Chanel: 6; CoverGirl (Coty): 14; Charlotte Tilbury: 15; Dior (LVMH): 16; YSL Beauty (L’Oréal): 22; L’Oréal Paris: 23; Illamasqua: 26; bareMinerals (Shiseido): 30; Estée Lauder: 33; Lancôme (L’Oréal): 40; and MAC (The Estée Lauder Companies): 46.

It’s clear that Fenty is the exception rather than the rule. Although, frankly, if we were Lancôme or MAC right now, we’d be a little pissed.

The effusive headlines are a result, I think, of the fact that this is no afterthought or marketing wheeze. This is a mission statement and Rihanna has put her product where her advertising campaign is.

For Rihanna and her Kendo / LVMH backer have launched Fenty at a time when diversity is a hot topic but there’s still a huge disconnect between the high-profile marketing campaigns and the product ranges they are promoting. “Diversity is not a trend, nor is it about selling stuff… it’s a necessary part of modern life,” says Tahmina Begum in an excellent piece in The Debrief on why big brands so often get it wrong.

Of course, it helped that Rihanna’s campaign dropped at exactly the same time that L’Oréal was under fire for sacking Munroe Bergdorf just four days after she was hired as a ‘diversity champion’.

There everyone was, up in arms about the French beauty giant’s hypocrisy, and Rihanna was like: ‘hi guys *waves*’.

But this is no flash in the pan. Granted, the timing was awesome but that’s not to say it wouldn’t have been just as successful had L’Oréal announced it was standing by Bergdorf. Fenty Beauty is walking the walk when so many others are merely talking the talk. No wonder it’s broken records, reportedly profiting more than its US$10 million investment just weeks after release – and several new launches are in the pipeline from lipsticks to skin care.  Rihanna Where Have You Been? You’re totally going to Run This Town.