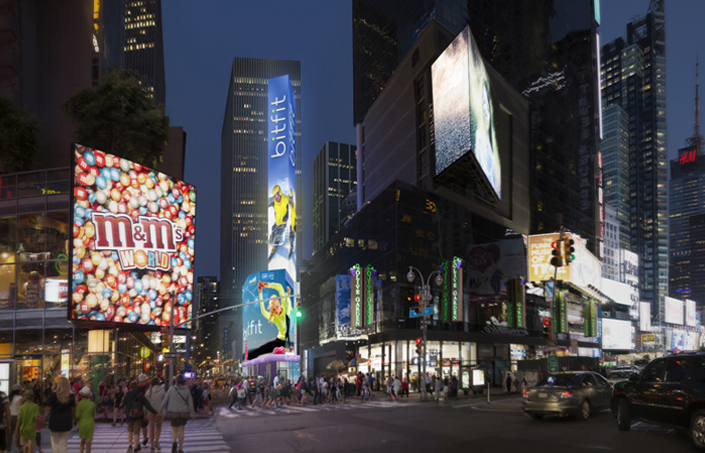 Coty USA has signed a lease for a five-floor retail building in New York’s Times Square, according to a report published by the Commercial Observer, quoting WWD as its source.

The US luxury behemoth is said to have shaken on a 10-year lease for the entirety of the 10,040 square foot building at 719 Seventh Avenue, which also goes by the name 30 Times Square as well as the 5,800 square feet of LED billboards that adorn the façade. Terms of the deal were not disclosed.

The owner of CoverGirl and Calvin Klein perfumes is yet to reveal its plans for the space but the building was designed as a flagship and it is widely believed that the key appeal for Coty lies in the highly visible advertising space.

“Part of the attraction of Times Square is the signage and media. [Coty] is getting over 5,000 square feet of LED signage with visibility from every angle of the Bowtie,” Brett Herschenfeld, Managing Director and Head of Retail Leasing at SL Green, told WWD.

“The newly built multi-level retail and LED offering was completed in Q1 of 2017 and is now in turnkey condition. with fully operational LED displays visible from every angle within ten blocks. Located directly between the new Marriott Edition, NFL Experience, Hershey’s, Cirque du Soleil and the first ever Hard Rock Hotel to open in NYC, 30 Times Square presents monumental, untapped commercial and marketing opportunities on a block that yields 10 billion brand impressions and $5.8 billion in consumer spending a year. Its tenants are set to define the new view from Duffy Square, a view to be seen, photographed and shared online by more than 42 million visitors a year,” reads landlord SL Green Retail’s website description of the space.

Despite a wider retail slump, property in Times Square continues to attract high profile tenants and command premium rentals, with the average ground-floor asking rent in the area standing at US$2,100 in fall 2017.