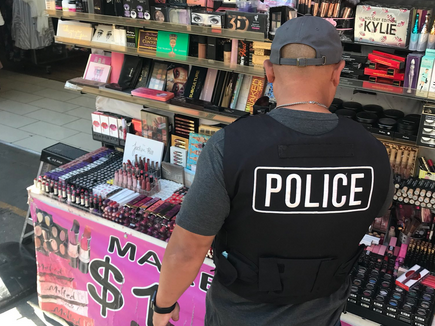 The Los Angeles Police Department has staged multiple raids across the city’s Fashion District, according to a report published by ABC 7.

Police Captain Marc Reina revealed on Twitter that some US$700,000 worth of counterfeit cosmetics were seized during the operation and some were found to contain ‘bacteria and human waste’.

The fakes were alleged to be copycats for popular brands such as Urban Decay, NARS, MAC and Kylie Cosmetics, among others.

“If you’re getting something that’s 50 percent off, 75 percent off – it tells you that it’s bad,” Reina pointed out.

The raids were prompted by consumer complaints, which were logged with the cosmetic companies behind these well-known brands. The products were traced back to Santee Alley, raising alarm and provoking investigation by the Anti-Piracy Unit.

Some six business owners were arrested following the raids, while the remaining 15 businesses raided and cited were issued with cease-and-desist orders.