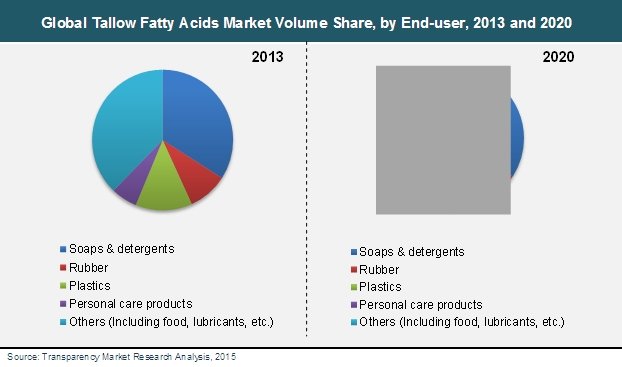 The global market for tallow fatty acids, which are widely used in soaps, is anticipated to reach a value of US$2.74bn by 2020, according to a new report.

US firm Transparency Market Research estimates that the market will register a compound annual growth rate (CAGR) of 2.3 percent between 2014 and 2020.

Demand for tallow fatty acids was the largest from the soaps & detergents segment in 2013, the report states. In terms of volume, the market stood at 1,484.3 kilo tons in 2013.

Rising demand for soaps & detergents is projected to be the major factor driving the demand for tallow fatty acids in the near future.

In particular, the market for soaps & detergents in Asia Pacific and South America is likely to expand significantly due to the changing lifestyle of people and growing modernization, the report predicts.

The segment was followed by saturated fatty acids where C18, C14, and C16 acid groups are used in lubricants, soaps, rubber, plastics and other end-users. Stearin, palmitin, and olein are three most important fatty acid esters used in the production of soaps.

Additionally, increasing usage of tallow fatty acids in rubber and plastics industries is anticipated to contribute towards growth of the market. However, changing preference of manufacturers from animal based raw materials to vegetable based raw materials is likely to slow down market growth. Rising usage of tallow fatty acids in other emerging end-users such as pharmaceuticals and personal care products is estimated to provide new opportunities for the growth of the market.