Diversity in beauty – where next? 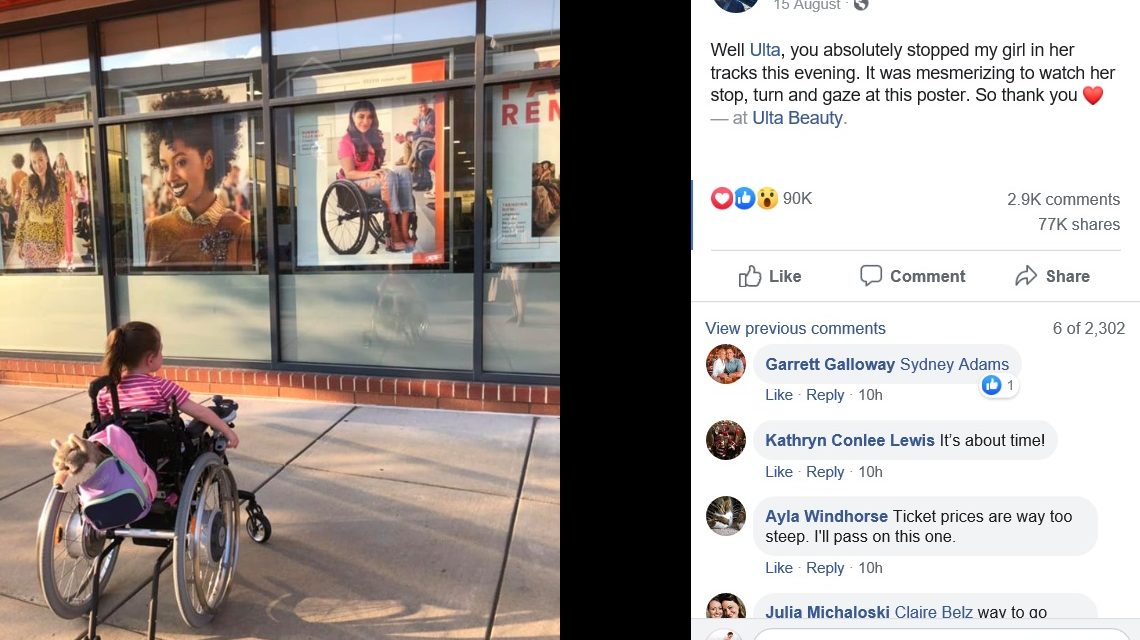 There’s no doubt that diversity has been a hot topic in the beauty world for the last few years. We’ve seen numerous inclusivity campaigns launch to great acclaim, and we’ve had our fair share of scandals to boot.

Be it age, gender, sexual orientation, size, skin colour, dental health, skin conditions, disability or religion – there’s a beauty brand out there breaking down barriers. But we’re not there yet, as two very different news stories proved this month.

Indeed, it was a tale of two Ultas as, on the one hand, a post from a US mom showing her wheelchair-using daughter admiring a poster in the window of the beauty chain’s Leesburg, Virigina store that featured a woman in a wheelchair went viral.

“Well Ulta, you absolutely stopped my girl in her tracks this evening,” Carolyn Kovacs Anderson captioned the post on Facebook. “It was mesmerising to watch her stop, turn and gaze at this poster. So thank you.”

At the time of writing, the post had racked up 90,000 reactions, 77,000 shares and 2,900 comments, not to mention coverage across major media outlets. Those figures alone show that diversity campaigns done well not only can boost the self-esteem of individuals but can also be a sensible business decision. After all, this is free marketing at its best.

So far, so very heart warming. But that’s not the whole story. Because the other Ulta-related news rumbling this month has been a racial profiling scandal. Shoppers have been sharing tales online of staff closely monitoring their progress through the store, seemingly because of their race, stories that have been corroborated by former employees.

Of course, it’s worth pointing out that Ulta isn’t the only one – Sephora’s recent inclusivity drive followed a high-profile racial profiling accusation. And although Sephora denied that its We Belong to Something Beautiful campaign was motivated by the SZA scandal, it did at least have a diversity drive in the works. Ulta’s response is distinctly less proactive.

“These accounts are disappointing and contrary to our training and policies,” the retailer said in a statement. “We stand for equality, inclusivity and acceptance and strive to create a space that is welcoming to all.”

That’s all well and good but a policy is a piece of paper. If racial profiling is occurring, then both Ulta and Sephora need something a little more radical.

Step forward Cephas Williams, whose ‘I am not a stereotype’ series captures 56 black men in a hoodie, including UK Member of Parliament David Lammy, in a bid to combat the negative portrayal of black men and boys in the media and discourage stereotyping of people according to their skin color and clothing.

But more than anything, I think it’s important to acknowledge that our work here is not done. That a positive response to a campaign or a morning’s training doesn’t mean that it’s #problemsolved. To answer the question I posed in the title, we need to see inclusivity in action, not just in a campaign – whether that’s welcoming everyone who walks through the door in the same way or ensuring that opportunities are accessible to all.