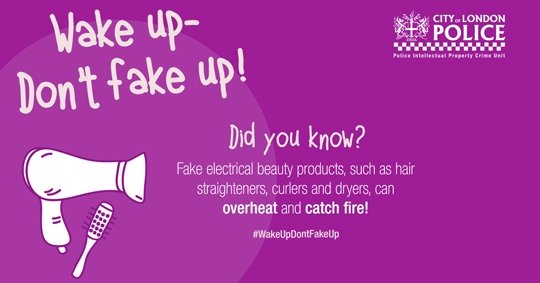 Laboratory tests on fake cosmetics sold in the UK have shown them to contain traces of human urine and toxic chemicals such as arsenic and cyanide.

The City of London Police today launched their ‘Wake up – don’t fake up’ campaign to warn consumers against purchasing counterfeit cosmetics.

In the UK, it is estimated that consumers spend at least £90 million every year on fake makeup, perfume and electrical goods such as hairdryers and stylers. The increasing popularity of online shopping has helped to facilitate this trade as sellers use generic stock images of products to deceive buyers who are unable to gauge the look and feel of goods before they make a purchase.

Police have revealed that laboratory tests have shown counterfeit perfume sold in the UK to contains poisonous chemicals including cyanide and even human urine.

Fake cosmetics such as eyeliner, mascara, lipgloss and foundation were also found to contain toxic levels of chemicals and harmful substances such as arsenic, mercury and lead. Side affects of such chemicals include allergic reactions, such as skin irritation, swelling, rashes and burns as well as leaving the consumer with longer term health problems.

Counterfeit make-up is often produced in un-sanitised and un-hygienic factories and there have been cases where rats’ droppings and poison have also been found in the phoney cosmetics, police warn.

The Wake up – don’t fake up campaign also highlights that fake electrical beauty goods, such as hair curlers, dryers and straighteners are not subject to the same vigorous safety tests as genuine items meaning that the bogus product could cause electrocution, or could overheat and catch fire.

In the last 18 months, the Police Intellectual Property Crime Unit (PIPCU) has suspended more than 5,500 websites selling fake luxury branded goods as well as seizing more than £3.5m worth of fake goods.

In 2014 PIPCU dismantled a criminal operation suspected of importing and selling counterfeit goods. The team seized a shipping container which contained what is believed to be more than 4,700 counterfeit versions of one of the UK’s most popular beauty brands, including foundation, bronzer, lipgloss, eye shadow and eyebrow pencils.

City of London Police, Detective Superintendent Maria Woodall who oversees the Police Intellectual Property Crime Unit (PIPCU) said “Criminals are exploiting every opportunity to fool customers into buying counterfeits in order for them to make some quick cash – putting peoples’ health, homes and lives at risk. Beauty products are meant to enhance your features however the fakes can in fact do quite the opposite. Our general rule is; if it seems too good to be true then it probably is!