Galactic make-up trend – from a galaxy far, far away, or closer than we think? 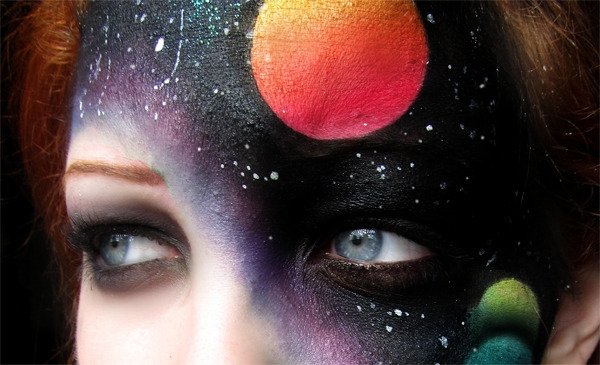 They’re everywhere; on bags, clothing, and stationery – they’re everywhere. Yes, I’m talking about Unicorns. The latest fantastical trend gracing every market from fashion to homeware to beauty. However, it’s not just this mythical legendary creature that is getting all the celebs, bloggers, vloggers and finger-on-the-pulse beauty consumers hot under the collar. As far as trends go, galactic make-up is also causing quite a stir.

Let’s cast our weary heads back to 2016, the year, some may say, the world went mad, and what better way to truly embrace a plethora of change then grab the totally outrageous with both hands. And that’s certainly what happened with the upsurge in galaxy freckles. Yes, you heard it right, galaxy freckles. An instant Instagram-hit, this space-age trend consisted of painting a constellation of stars across one’s face to create a – you guessed it – space-age look. Quickly becoming a favorite of YouTube video bloggers and social media, the phenomenon has since moved on this year with a slew of celebrities taking the galactic theme to new levels, with this movement being hailed the trend of the year by PopSugar in 2016, with Halloween bringing out a slew of weird and wonderful adaptions of the motion. However, it hasn’t been simply constrained to the creepy holidays, with the 2017 festival season highlighting that the appetite for all things shiny, starry and downright spacey is stronger than ever. Indeed, even Chopard opted for a space theme for its Cannes film festival bash, where the likes of Kendal Jenner and Bella Hadid donned shimmery silver gowns – albeit foregoing the dot-to-dot star make-up. However, a number of celebs and influencers did push the boundaries at recent festivals such as Coachella, with the likes of Kylie Jenner, make-up guru James Charles and Alessandra Ambrosio all donning interstellar cosmos-inspired looks. Likewise Cara Delevigne has recently championed the movement by sporting a futuristic silver hair look at the recent Met Gala, while celebrity make-up Pat McGrath is embracing galaxy-inspired beauty with both hands having launched a galaxy eye shadow Dark Star 006 earlier this year. And if McGrath is doing it, you know many others are set to follow.

But is this look being embraced by mainstream consumers? Do the festival looks transgress into day-to-day life? In a word, yes. While I’ve yet to see any space-age beauty bombshells on my weekly shopping trip, the trend affirmation from the beauty bloggers, Instagram feeds and how-to YouTube videos are making it accessible to all. From simple blue lipstick to intricate and detailed designs, the galaxy trend looks set to stick around. And there are a fair few brands cashing in. Urban Decay is well known for its futuristic offerings, and being a vegan brand ticks another hot-box too, Kat Von D’s Alchemist Holographic Palette is garnering a strong following, while NYX is catering to the trend with its Cosmic Metals lip cream, with the Galactic product offering a metallic sheen to stay true to the space age look.

Alas, I’m sad to say it won’t be a make-up look I’ll don at my next coffee date, but I won’t rule out a silver lip or metallic eye as a homage to the must-have movement of the moment on my next night out. To infinity and beyond, as Buzz would say.