Just one in 10 ‘completely satisfied’ with their looks, according to new global survey by GfK 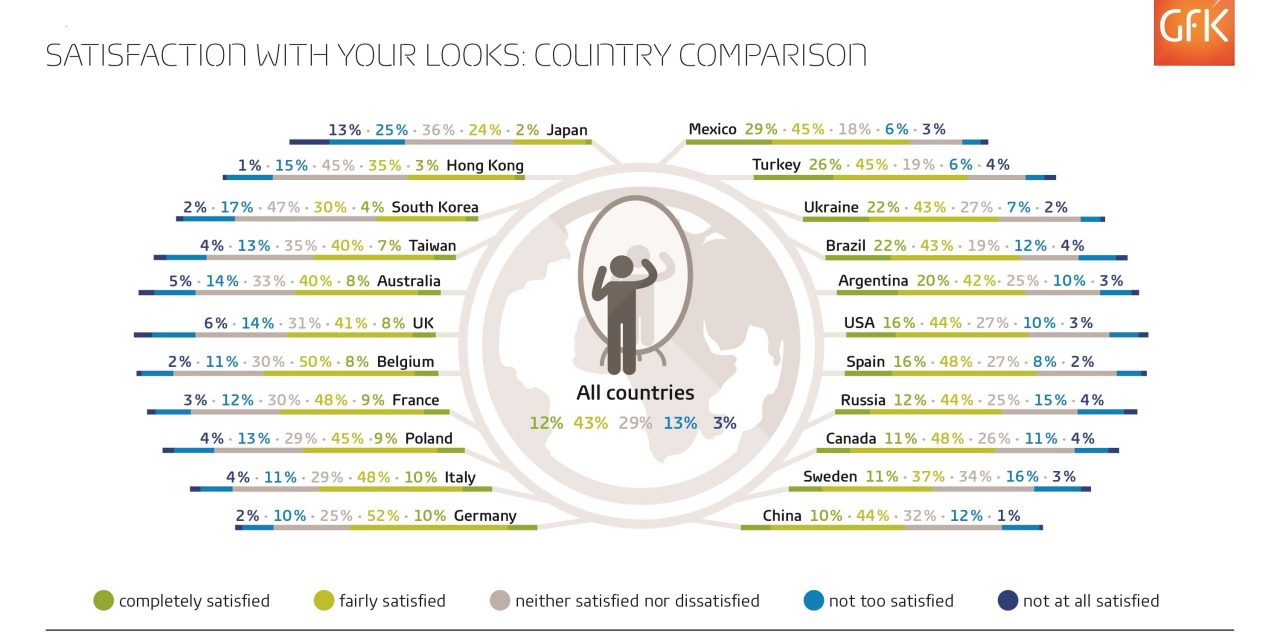 Wading into the contentious ‘beach ready’ debate, market research company GfK has conducted a global survey to reveal how satisfied people are with their looks, a useful tool for companies looking to tailor their marketing message to specific markets.

Across all 22 countries surveyed, over half (55 percent) of consumers aged 15 and over claimed to be satisfied with their looks overall, but only 12 percent maintained that they were ‘completely satisfied’. Some 16 percent of those surveyed professed dissatisfaction with their looks, with three percent revealing that they were not at all satisfied.

In those markets where complete satisfaction is highest – namely Mexico, Brazil and Argentina – marketing should center around ‘maintaining’ or ‘refining’ your look, according to the research organization. When the parameters are widened to include those who say they are fairly satisfied, it appears Mexico is the country with the healthiest body image overall (74 percent of respondents), followed by Turkey (71 percent), Brazil and Ukraine (65 percent), and Spain, Germany and Argentina (62 percent) tied in fifth place.

The Japanese are the most critical of their looks – 38 percent were reported to be not too satisfied or not at all satisfied – followed by the British, Russians and South Koreans (all on 20 percent), with the Swedes and Australians bringing up the vanguard with 19 percent a-piece. Here, consumers are more likely to respond to products that promise to improve or change their appearance.

The survey results challenged the conventional wisdom that younger consumers and women are more dissatisfied with their looks. Surprisingly, teenagers were revealed to be only marginally more self-critical than those aged 20-59. Overall, people aged 60 and over are the most satisfied with their appearance.

When the results were split by gender, it appears men and women are equally happy with their looks  – with 43 percent claiming to be fairly satisfied and 12 percent completely satisfied. Only three percent more women claimed to be dissatisfied than their male counterparts, while three percent of men are not at all satisfied versus four percent of women.