Let’s talk moms: debunking the mother of all marketing myths 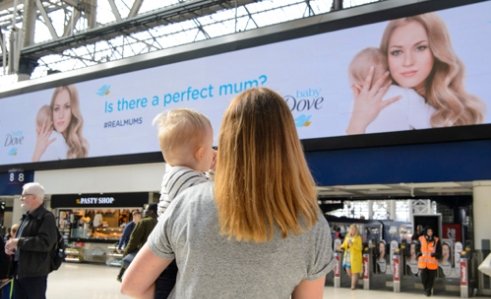 Mother’s Day is approaching in the US, so this week we’re turning the spotlight on moms. Or more specifically, how the cosmetics industry markets to them. For Dove’s recent #realmums (or #realmoms depending where you see it) campaign highlighted a disconnect between the way the media portrays motherhood and the reality of that unpaid, undervalued yet utterly scrutinised role.

And the Unilever-owned brand hit the nail on the head, releasing a teaser campaign in the UK in early April with billboards featuring an eerily flawless woman cradling a baby next to the strapline ‘Is there a perfect mum?’ Social media went wild, of course, with most posts criticising Dove for its airbrushed-AF depiction of motherhood.

But Dove had an ace up its sleeve – the image was in fact a CGI composite of thousands of images of ‘mothers’ in newspapers, magazines and social media, created by an AI algorithm. Dove’s goal was to open up the conversation and encourage us all to embrace and celebrate the gritty reality of day to day life as a mom, whatever our parenting style.

In doing so, Dove has harnessed a growing movement, kick-started by mom-bloggers who are putting the warts-and-all version out there – and we can’t get enough of it. Social media stars Hurrah for Gin, the Unmumsy Mum and Peter and Jane have all scored book deals off the back of their witty and relatable take on motherhood. And even the Duchess of Cambridge has admitted that she finds it tough at times.

And while images of celebrity mothers looking picture perfect just days after giving birth are still blighting our newspapers, it’s increasingly becoming the norm to recognise that not only does motherhood not look the same for everyone but also that looks are irrevocably changed by the process of growing a human, and then caring for said miniature person 24/7.

That might not sound like good news to the cosmetics industry, but I can assure you it is. For a start, moms aren’t just buying for themselves, they’re buying for the next generation too – get your message on point, and you’ll not only reach the mom, but their little ones to boot.

And second, moms are absolutely game for any quick fix you can offer them. Because – newsflash – we didn’t change our personalities overnight. We don’t transform into Maria Von Trapp overnight. We just have less time on our hands. Multi-tasking, hero products are the way forward: think in-shower treatments, make-up wipes and tinted moisturisers. Plus anything that can make us look a little less knackered please, thank you very much, all served up with no side of judgement.

Is that too much to ask?