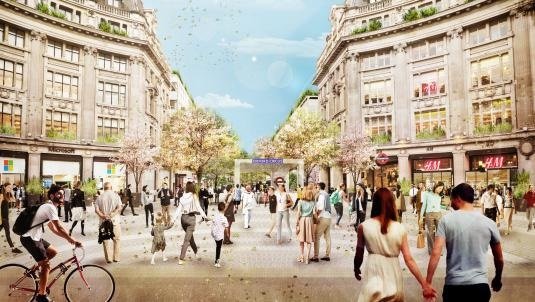 THE WHAT? The centrepiece of London’s flagship shopping street, Oxford Circus is to be transformed into two, pedestrian-friendly piazzas as part of plans unveiled by Westminster Council. The new piazzas will become ‘London’s front door’, the local authority said and will be the subject of an international design competition.

THE DETAILS Works are due to commence later this year and the scheme will also include improvements to the public spaces in and around Oxford Circus. By prioritising people over vehicles, the changes also aim to improve air quality.

THE WHY? The works are designed to encourage ‘dwell time’, improve access and make the city center more eco-friendly, which in turn will up visitor numbers and spend. As Westminster City Council Leader Rachael Robathan attests, “These new bold plans to reinvent Oxford Circus will see the first significant redesign of the nation’s favourite high street in decades. We hope the creation of these pedestrian-only piazzas at Oxford Circus, surrounded by newly planted trees and large seating areas, will instil much needed confidence in the West End and support local businesses severely affected by the pandemic. We want to bring the excitement and buzz back to these famous streets and make Oxford Circus London’s front door.