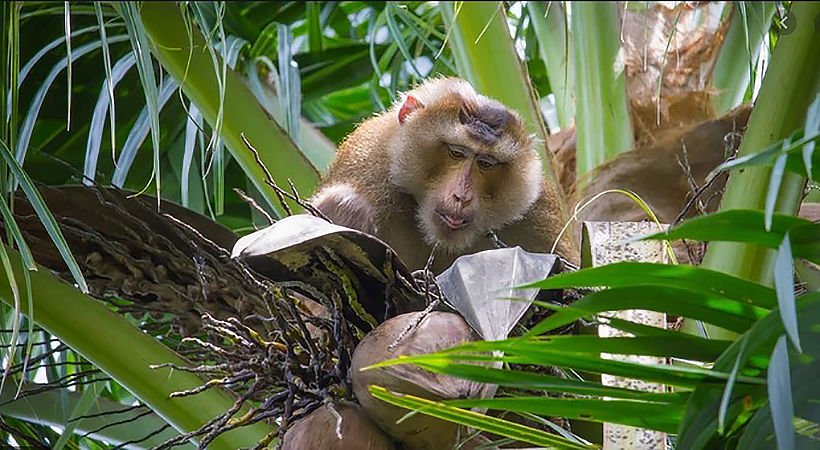 THE WHAT? A slew of major global retailers have ended partnerships with coconut milk suppliers Aroy-D and Chaokoh following a PETA Asia investigation highlighting that the coconuts were picked by ‘enslaved’ monkeys.

THE DETAILS A PETA YouTube video, which has since gone viral, shows monkeys picking the fruit while chained to poles in dirty conditions, as well as being left in small cages.

According to a PETA press release, “…a disturbing PETA Asia investigation reveals that terrified young monkeys in Thailand are kept chained, abusively trained, and forced to climb trees to pick coconuts that are used to make coconut milk, meat, flour, oil, and other products.
PETA Asia investigators visited eight farms where monkeys are forced to pick coconuts –including those for Thailand’s major coconut milk producers Aroy-D and Chaokoh – as well as several monkey-training facilities and a coconut-picking competition.”

As a result, retailers such as Walgreens Boots Alliance, Duane Reade, Boots, Morrisons, Sainsbury’s, Asda and Tesco have committed to not stocking Aroy-D or Chaokoh and not knowingly selling any own-brand coconut food and drink products of Thai origin.

Taking to a statement, Waitrose said, “As part of our animal welfare policy, we have committed to never knowingly sell any products sourced from monkey labor.”

THE WHY? While Jurin Laksanawisit, Thailand’s Deputy Prime Minister and Commerce Minister, stated that coconut-picking by monkey’s no longer happens on an industrial scale, there is still global concern about underground practices taking place for the country’s $400 million industry.

Following the report, coconut manufacturers have agreed to a traceability framework to give importers, distributors retailers greater transparency of the ingredients, from plant to shelf, according to Nikkei Asian Review.