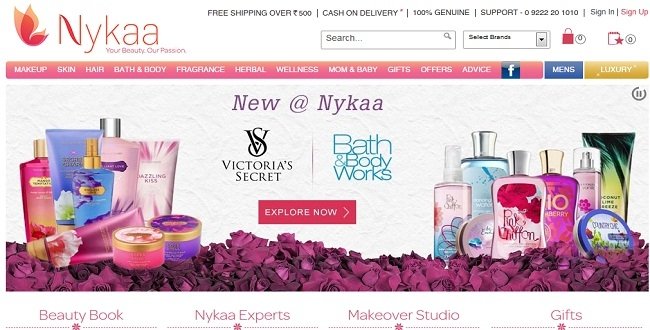 Nykaa has found various companies to invest in its Series B funding. And while the details of the investment have not been shared, it is said that the online cosmetic and wellness retailer has sold around 20 per cent of stake.

The private equity arm of TVS Group, TVS Shriram Growth Fund, and Techpro Ventures led this round of funding and were reported to have acquired a minority stake in the company with the investment of over $3 million.

The news follows on from last year when the company, which launched in 2012, raised $3.4 million from various other family offices and high-worth individuals and was said to have diluted a 10 per cent stake.

Former MD at Kotak Mahindra Capital investment banking launched the company alongside her husband Sanjay Nayar and will use this round of funding to market expansion, marketing and hiring new employees.

An online one-stop shop, Nykaa.com sells make up, skin care, hair care, fragrance, bath and body and luxury products, and is said to be inspired by high end beauty retailer Sephora. The company also has a physical presence and has opened a store in Terminal 3 of Delhi International Airport, with plans to open in other areas of Delhi, Mumbai and Bangalore. The company has also launched in-house products such as a nail varnish collection and bath and body products.