Shudu – love her or hate her, she’s taking digital to the next level 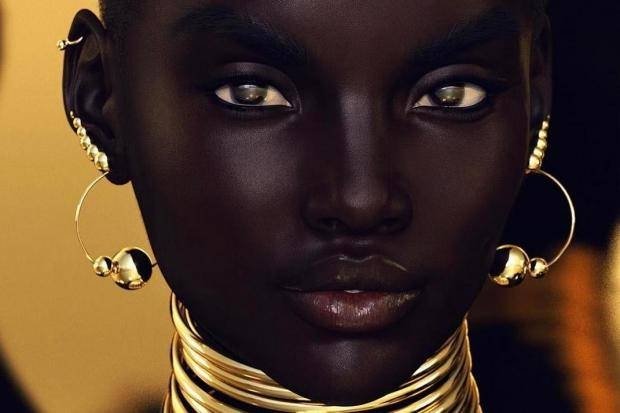 Unless you’ve been living under a rock, you’ll know that women are having a moment. The upshot of the Harvey Weinstein scandal has been an onslaught of movements celebrating women, their achievements, and their strength. So it’s only fitting, around International Women’s Day, that model-of-the-moment Shudu has come to the world’s attention. Although, if you’re a Fenty Beauty convert (and let’s face it, who isn’t), this stunning black model will have been on your radar some weeks ago when she was retweeted on the beauty line’s Instagram page, wearing the Rihanna-owned product.

So what’s the big deal? So there’s a new supermodel on the scene challenging the likes of Kendall Jenner, Gigi and Bella Hadid and Winnie Harlow for their spot as the ‘it’ models of our generation? It was always going to happen at some point. And for every stand-out model inevitably comes a big beauty push – see Fenty.

But there is a difference, and a pretty big one at that. Shudu Gram, with her 59,000 followers on Instagram, is fake. Yes, you heard me right, she is, in her creator’s own words, the World’s First Digital Supermodel.
As we predicted, the world of digital and beauty was always going to merge further in 2018, but even we here at GCN – the gurus of all things cosmetics – probably couldn’t have predicted this. But what we may have predicted, was the consumer backlash creator London-based photographer and digital artist Cameron-James Wilson was going to receive. But perhaps not the extent.

It seems that while Wilson is clearly a disruptor and innovator in the world of digital technology, having created Shudu out of 3D imaging, starting that she was “a way for him to express his creativity”, many consumers have taken offence at his need to create her in the first place. Comments such as ‘Black models, specifically dark skin black models are not a trend though. We should be the norm. Ok.’ and ‘A white photographer figured out a way to profit off of black women without ever having to pay one.’ have most definitely taken the sheen off the innovation.

So is this a 21st century technological coup or a serious case of misjudgement? According to Wilson, who told Refinery29.com, “Her creation was a part of the learning process when I was developing my 3D modelling skills and the only intention was to create an image of the most beautiful woman I could.”
In fact, rather than deterring him from future inventions or adding new digital discoveries to his impressive arsenal, he went on to say that he would, “continue to use Shudu the same way [he has] before, creating inspiring fashion visuals and promoting the talents of other artists and models.”

However, what we’ve learned from past media furores, is that elephants don’t forget. And with many consumers continuing to voice their concerns that Wilson created a fictitious black model, rather than hiring a real one in an industry already underrepresented in this area, any new creation by Wilson could be tarred before it’s even begun.