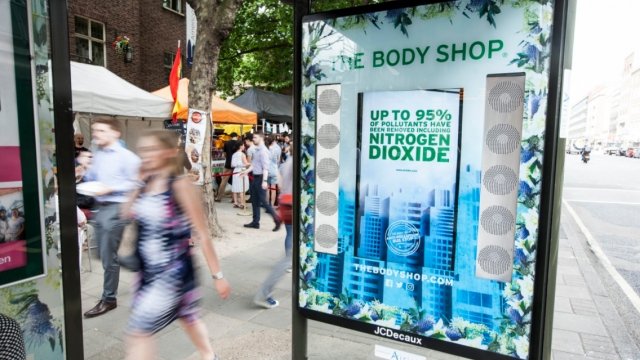 The Body Shop has teamed up with air cleaning system company AirLabs to launch an anti-pollution initiative in London, which aims to reduce air pollution exposure and deliver 95 percent cleaner air to bus stops.

The Body Shop, along with its media agency Axus, will incorporate AirLabs air cleaning technology, which removes harmful pollutants from city air including nitrogen dioxide (NO2) and particulate matter, into its brand advertising at three highly polluted bus stops within London.

According to the company, the system works by ‘trapping harmful particles (PM2.5) via a filtration system before gas pollutants, such as NO2, are absorbed with cleaner air delivered to people in the immediate vicinity, thus protecting them from harmful air pollution exposure. The clean air provided could fill more than 80 buses every day.’

Elen MacAskill, The Body Shop UK Marketing & Corporate Responsibility Director says: “While these air cleaning units have yet to be introduced on a wider scale, we’re making a start to help protect Londoners from air pollution exposure, as well as help raise awareness of this incredible technology available. We are calling on other businesses, transport operators, bus stop site owners and brands to follow this industry leading approach. The technology can help reduce urban pollution exposure for thousands of people every day where nitrogen dioxide levels exceed the legal limit.”

The move is said to be in line with The Body Shop’s strong stance on sustainability with the three bus stops being a pilot for the scheme.