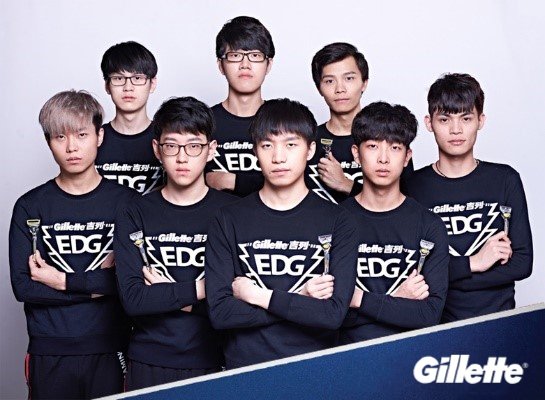 Gillette has announced EDward Gaming (EDG), the top Chinese League of Legends team in the world, as the brand’s first global e-sports partner. Gillette’s latest move is a sign that the brand is becoming increasingly immersed in the gaming world since entering the e-sports arena earlier this year as partners with ESL.

“We’ve all read about the incredible growth of gaming, but it wasn’t until we partnered with xPeke and witnessed the thousands of devoted fans who packed the Spodek Arena during the IEM World Championship that we truly understood the incredible passion of the gaming community,” said John Mang, Vice President, Global Gillette. “The commitment to precision and performance under pressure displayed by professional League of Legends teams was inspiring to us and ultimately led us to partner with Gillette’s first e-sports team EDG, the top team in China and one that’s poised to break out on the global stage in 2017.”

“It is an honor to be Gillette’s first e-sports team,” said David Ng, President of EDG. “For more than 100 years Gillette has been a leader in men’s grooming and has supported the best athletes and teams in the world. EDG is proud to join the brand’s prestigious roster and have its support moving forward.”