When the good turns ugly 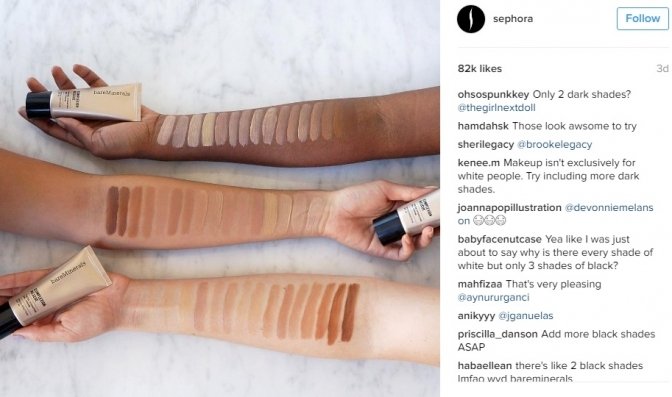 It seems the cosmetics industry has served up my blog post on a plate this week. If you cast your mind back just a mere seven days, you’ll remember my colleague Georgina championing the industry’s marketing innovators, highlighting the best of the best campaigns of recent weeks. Unfortunately it’s time for me to put the spotlight on the other side of the coin – when good marketing turns bad.

Indeed, this week it was a cacophony of marketing mishaps as some of the industry’s giants got it wrong. Oh-so very wrong. Yes, you know where I’m headed – and I’ve little doubt Sephora and bareMinerals are hanging their heads at the blunder that was that Instagram post.

I mean, at least they got that right. Instagram – a massive marketing tick. It was just the content of the post that got them a lot of bad press. Yep, beauty retail’s golden boy Sephora’s crown slipped slightly this week after it caused controversy regarding a photo it posted on Instagram of the numerous different bareMinerals foundation shades – with a mere two being deemed suitable for black skin. Ouch. And while they say any press is good press, I’m pretty sure this is the exception to the rule.

An oversight it may be, but it perhaps won’t hurt to remind bareMinerals that it’s missing a trick there. Indeed, let us not forget that so-called minority groups hold a lot of power and, according to a recent report, Hispanic consumers are the fastest growing and highest spending market within the US cosmetics market. bareMinerals, a little head’s up – I think it’s time to create a few more shades.

Given the global backlash regarding the post, I’d imagine Sephora and bareMinerals were giving Lancôme a silent high five for taking some of the heat of them, with the L’Oréal-owned French beauty giant also scoring a massive marketing own goal this week.

The company appears to have bowed to public pressure to cancel a promotional concert planned to take place in Hong Kong, due to the billed appearance of pro-democracy activist Denise Ho, who, it appears, Chinese fans aren’t too keen on.

Indeed it was a move that’s unfortunately got tongues wagging, with Ho proclaiming the company bowed to ‘bullying’; queue a myriad of press focusing on the cancellation of the concert instead of word of mouth spreading about what it was supposed to be promoting, which was… wait a minute, it’ll come to me… nope, not a clue.

However, if you’re thinking the beauty world has gone marketing mad, at least we have Kylie Jenner to hold down the fort. Yep, the teen beauty queen has once again made a Snapchat slam dunk by promoting the new packaging of her latest Lip Kit hue on the cult social media site. Perhaps it’s time Jenner evolved from make-up masterclasses and moved on to helping the multinational powerhouses learn a thing or two about modern-day marketing? Just a thought.